127 Hours: Between a Rock and a Hard Place 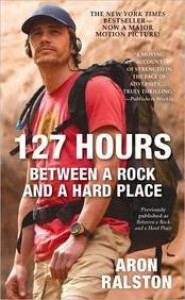 “It is better to be fiscally poor yet rich in experience-living the dream-than to be traditionally wealthy but live separate from one’s passions.”

This line early on in the book drew me in. Totally.

As a matter of fact, I didn’t expect much from the book in terms of language. I read it because I had seen the movie. But the book was a revelation. Ralston’s narration is deeply engaging, so much that it puts you right on the spot of action. He retells the story of his endurance in such a painstakingly detailed prose. The portion where he describes the amputation is particularly gripping.

However, the background chapters, ones that chronicle his previous near-death experiences, might make you debate if he had gone a step too far in his detail, for they become tedious, annoying and, sometimes, pretentious after a point. I felt he really could have used an editor. But the narrative towards the last leg of the book is so singularly compelling that it more than makes up for any issues I have with it.

Bottomline: Read this book. Love it or hate it, it will stay with you long after you have finished.